1. Valiant - Out of the fields 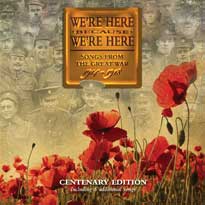 This CD album was compiled from the original soundtrack produced by Crocodile Music for a Channel 4 TV programme 'Lions Led By Donkeys' based on the book 'The Donkey’s' by the late Alan Clark in which the author examined the relationships within the British High Command during 1915. More recently a selection of this music was featured in the BBC TV programme 'I Was There' The Great War interviews.

This album is unique in that it features a lesser known WW1 poem 'Out of the fields I see them pass' by John Galsworthy set to music, also included is the first recording of 'The Uniform Grey' composed in 1909, it was the marching song of the 13th Princess Louise’s Kensington Battalion, the London Regiment one of London’s Grey Brigade.

This Centenary Edition focuses through music and song on the comradeship and the spirit of the ordinary serviceman of The Great War.