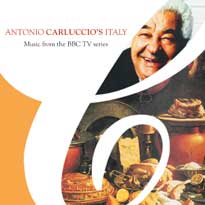 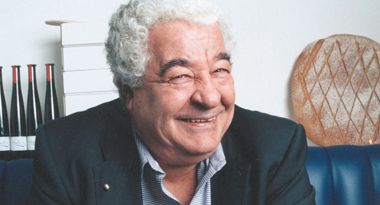 Antonio Carluccio writes: "Considering that I am agnostic, it is remarkable that I accepted a charming, religious tune to be the accompaniment to my two BBC television series about the culture and food of my country. It happened while we were shooting a scene in Piemont, on the little island 'Pescatori' in the middle of Lake Maggiore. I was there with a plate of fish which had been prepared in the house of a local fisherman. I took the fish to the restaurant of the Hotel Venbeno where I cooked the fish."

"It was pouring with rain and while I was watching the street flood with water the little church started to play the bells which call the villages to afternoon service. Everyone in the crew was attracted by the 'Maria' which was played with such gentility and so the soundtrack of the series about the cuisine of the North and South of Italy produced by Crocodile Music was born." "Everytime I hear this tune, which is very popular in Italy, a certain emotional feeling washes over me and I see the entire series pass in front of me which is always full of sunshine."