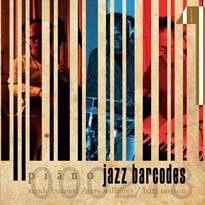 This is the trio's debut album

Introducing the debut album of the Bazz Norton Trio:

Sandy Burnett is best known for his classic music, not only for being a presenter on BBC Radio 3, but he has also been musical director for the Royal Albert Hall, the Royal Shakespeare Company and the Royal National Theatre. His jazz credits include tours with Bucky Pizzarelli, Salena Jones and Lillian Boutt.

Gary Williams drumming technique stems from his experience playing with an electric mix jazz, reggae and rock bands. His style is unusually musical, keeping an ear equally on the bass player and the melody. After his very first time playing with the trio at Piano Kensington, he became the regular drummer on Jazz Nights.

Bazz Norton's 30 years career has seen him entertain in piano bars all over the world, including 7 years on the Scandinavian piano bar circuit, playing rock and roll, followed by 6 years in the famous Savoy American Bar, playing a more sedate jazz standard repertoire. His list of over 2,500 songs makes him one of the most versatile entertainers on the piano bar scene.