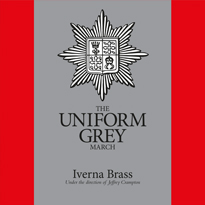 The Uniform Grey was the marching song of the 13th Princess Louise's Kensington Battalion, The London Regiment. Composed in 1911 with Words by Lt. Col. F.G. Lewis, T.D and Music by Lt. Col. W.R.J. McLean, T.D. (Mus.B.) The Uniform Grey was inspired by the colour of the various London Regiments' uniforms of the time, which was predominantly Grey. Thus, London Regiments such as The Queens Westminster Rifles, Civil Service Rifles, The London Scottish, The Kensingtons were termed 'The Grey Brigade'. The vocal version of 'The Uniform Grey' is performed on the Great War Centennial Commemoration CD 'We're Here Because We're Here' which is also available on this website.

Presented here are two arrangements version 1 at 120 paces per minute and version 2 at 140 paces per minute, the pace to which Rifle Regiments march. Arranged 2020 by: J Crampton & J Mealing