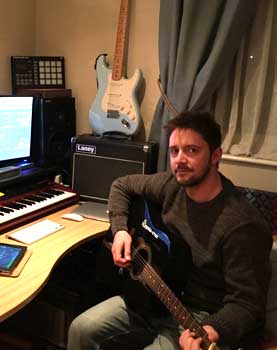 From a young age, Steve has pursued his love of music by learning the trumpet, piano, drums and guitar and as a teenager by playing and performing at live venues with various bands and orchestras in the West Midlands and London.

Steve moved to London from his home city of Birmingham in 2004 to study Music Technology at the London College of Music. Having successfully achieved a BA (Hons) he was awarded a LCM scholarship to continue his studies to Master Level and in 2009 he was awarded a Masters in Audio Technology with a distinction.

In 2013 Steve continued his passion for music-making by taking a six month sabbatical in Antarctica gathering inspiration from nature. The sounds and experience that he gained from working in this remote region have been compiled and feature in his forthcoming album ‘Antarctica’ due to be released in 2017.

‘Antarctica` will join his expanding catalogue of digitally released albums of varying genres from Rock to Dubstep, Chill-Out to Foley